“I knew my pumpkin was heavy, but I didn’t expect it to be this heavy. There is a secret as to how I got it this big, but the secret is all mine,” said Van Greunen light-heartedly.

“I have participated in this competition for the past five years, but have only once had my pumpkin weighed in the final. It is too easy to make a mistake with these big pumpkins, such as giving it too much water and then it rots.”

Van Greunen was followed closely by Jaco Uys who was awarded second place with his 387,5kg pumpkin with Louwrens van Deventer, last year’s champion, finishing in third place with a 385,5kg pumpkin.

As champion of the 2017 Giant Pumpkin Competition, Van Greunen received R12 000 in cash while second and third place received R6 000 and R3 000 respectively. Prize money was sponsored by Shoprite Checkers and additional prizes were also awarded for the smallest, prettiest and ugliest pumpkins. 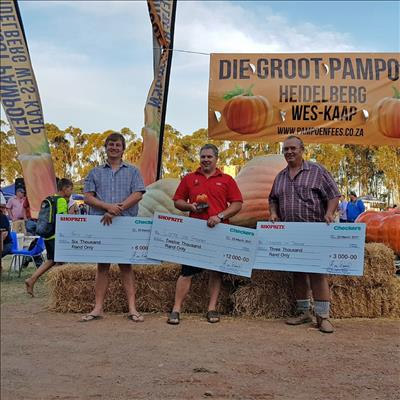